If that photo isn’t scrapbook perfect, have no fear, there may be a solution! If your photo has terrible coloring, is too blurry or out of focus or shows a messy background don’t delete it right away!

TIP: "Flipping" a color photo to black and white will correct or at least "cover up" a lot of everyday problems with photos! Give it a try! 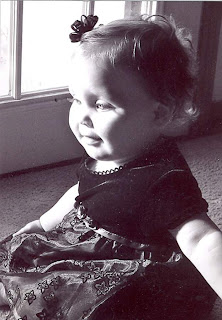 Notice in this photo that the subject (my Terra Cadence as a baby of course) is perfectly in focus and the shot is just precious. The black and white shot is a great one, and in fact, I used it in my 2004 Christmas cards!
Little do you know….I have a secret! And it's been long enough that i can finally share it with the world!
Terra, as you can see, is sitting in front of an outside door. With 2 dogs in the house, that door was beyond icky looking with not only scratches and dirt…but also doggie slobber all over the windows! Daily Windex wouldn’t have solved my problem, but changing the photo to black and white did the trick. No longer is the focus on my disgusting slobbered on windows! The black and white managed to take that emphasis away and now all you see is a gorgeous little girl in a timeless black and white portrait!

I took a series of photos to scrapbook in my daughter’s bathroom at our old house. I painted the bathroom bright rubber ducky yellow and decorated it in the same. She was just beginning to “notice” herself in mirrors at the point I took these shots, so I set her up on the counter, in front of the mirror, and began to snap away. Little did I know, the bright yellow paint was so bright that it was reflecting off of the large mirror and thereby tinting all of the photos in yellow!

My baby was coming out yellow! I got so many awesome expressions that I again decided to play around with the photo to salvage them. Black and White did the trick, again! The focus went from “Why does she look like she is painted yellow?” to “Oh, how adorable!”

So, don’t lose hope and delete that not-so-perfect-yet-perfect-at-the-same-time photo before first trying to salvage the incredible yet flawed shot you took! A little work in Walgreens.com photo engine will work wonders and just might save that priceless shot!
Posted by Melynda at 12:49 PM